"Dana and Sarah literally illuminate, with light, the relationship between human beings and the landscape they inhabit. Through investigating subtle landscape changes, unseen scars, and abandoned spaces, themes of beauty and devastation come forth to collide and embrace." -Progressive Galleries

Light itself is a tool of adornment. To adorn, by definition can mean, “to enhance or enliven the appearance of.” Light by definition is, “something that makes vision possible.” We use the ephemeral material light as a way to adorn or direct people’s attention to unseen places and spaces. During the night, we have projected still and moving images on buildings, billboards, and various landscapes across the United States. Visually, the building, billboard, or landscape becomes a canvas on which to illustrate our ideas. Through this act of projecting light, we can visually place relevant subject matter onto the places and spaces; whether it is photographs, words, drawings or videos. Since 2008, we have collaborated on video installations that investigate resources such as energy (“Efficient Energy”) and building materials (“Brick”). Often installed in a public place, the goal of these projected, simple, repetitive, moving images is to raise questions about the ethics associated with material sourcing such as: Where do your materials come from? Where do your materials end up? It is a very powerful situation when people’s vision is directed towards something usually unnoticed and they immediately become consciously aware. Our hope is that with awareness comes knowledge – and as the saying goes, knowledge is power and we believe that power can create change. 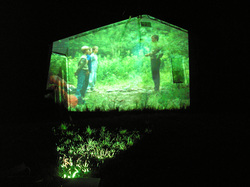 "In my projection I seek to call attention to the plight of abandoned and foreclosed houses in Gettysburg, PA by collecting photographs of the space when it was inhabited and projecting them onto the uninhabited buildings. Gettysburg, where I was born and raised, is located in Adams County; a county that is flourishing with new developments for houses, yet has 21 foreclosed houses, adding to Pennsylvania’s grand total of 2,878 foreclosures in 2008. This piece will address the sustainability of building new developments when we could be repurposing these houses." -Sarah Zentz

(Left photo) A projected old photograph onto an abandoned building at Glory Ridge in Gettysburg, PA. The photo is of boyscouts when the space was used to hold summer camps during the 1990's,. 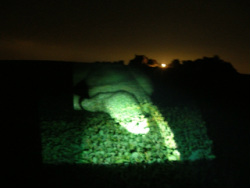 "Lancaster, PA is well known and flourishes with having some of the "best" top soil in the United States, yet the city is climbing the charts in female citizens developing breast cancer. I want to address this issue by taking the personal issue of woman’s breasts and make it public. I desire to project larger than life black and white photographs (taken by me) of women who have undergone breast cancer surgery onto fields of GMO corn in Lancaster. What I hope to do in my projections is make people start to question the uncanny parallel between the rise in breast cancer and the increase of runoff from conventional agricultural practices." - Sarah Zentz

(Left photo) A portrait of a woman who has had her right breast removed and is holding her prosthesis breast in her right hand. 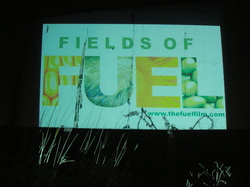 "Fields of Fuel is a documentary film about biodiesel -- fuel made from organic products. It can be made from corn or soybeans, but can also be made from agricultural products less impactful on the environment, like switch grass and algae. In an effort to support and publicize the film's release, I designed a mock advertisement for the film, including the films website. The image was projected onto a blank billboard, standing in a field of corn, along a busy highway. The projection lasted a several hours on one night." -Sarah Zentz

(Left photo) A temporary projected advertisement on a blank billboard. 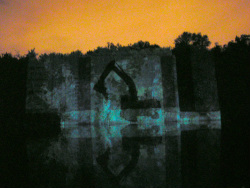 "There are many quarries across the United States - the majority of them well hidden off the highway. In a semester long investigation of abandoned spaces, I explored an inactive quarry that was only a mile from my University. Since Lancaster is full of field of industrial agriculture, I envisioned the space was too once a field growing food. The deep hole where limestone had been mined from was now filled with water. The impact man has on landscapes is indescribable.

(Left photo) A projection of an excavator that appears to be mining limestone from the stone wall. 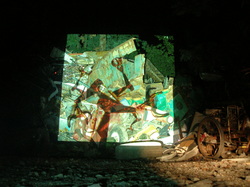 (Left photo) A projection of claw crane's onto a pile of waste at a junk yard. 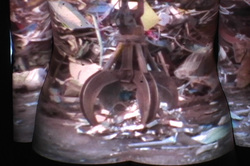 waste |wāst| adjective
1: (of a material, substance, or byproduct) eliminated or discarded as no longer useful or required after the completion of a process

land \ˈland\ noun
1: the surface of the earth and all is natural resources

(Left photo) A video of a claw crane at a metal scrap yard projected onto a human body. 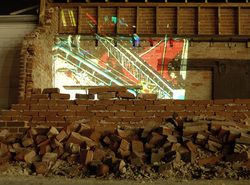 (Left photo) A video of a an active sand quarry projected onto a demolished brick building. 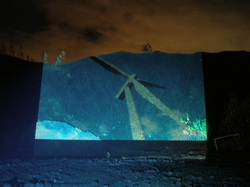 (Left photo) A video of a windmill projected onto a coal tailings (waste) pile.